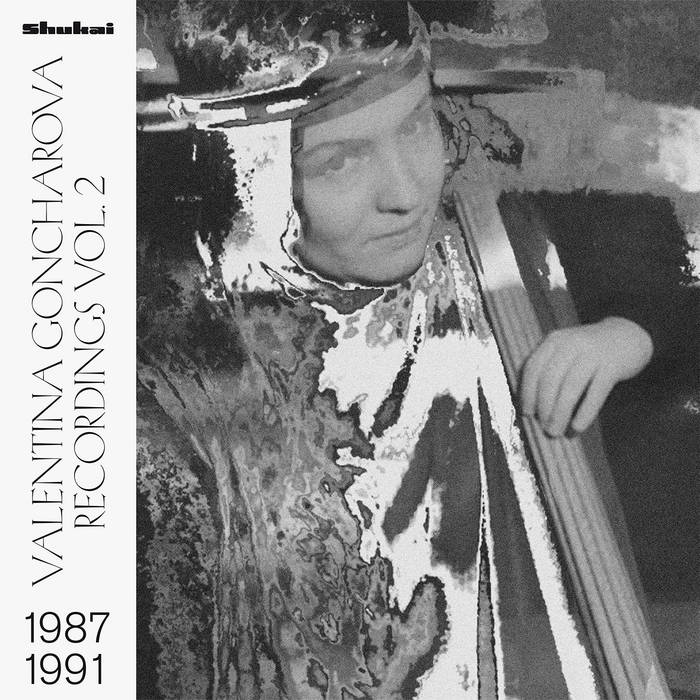 Following the unpublished works of the Ukrainian/Estonian musician Valentina Goncharova, Volume 2 of Shukai’s archival project sits in direct contrast to the solo works of Vol. 1. Spending her youth studying classical music first in Kyiv and then in Leningrad, Valentina began her musical career with rigorous compositional study and concert violin performance. This long player of duets as such casts a light on Goncharova’s experiences with early free jazz, democratic improvisation and introductions to pure electronic sound. Where Vol. 1 explored her home studio experiments and flirtations with musique concrete and new age, this volume seeks to give audience to similarly DIY recordings developed in collaborative environments away from the conservatoire. Properly documenting sessions revolving around smoky jazz cafes, art galleries, salons and theatre venues across Riga and Tallinn, these seven pieces add to the historical narrative of the soviet era avant-garde and show the broader spectrum of Valentina’s work.

We begin in Riga with an adapted score for a delicately unfolding violin drone, voice and saxophone performance produced by Valentina and Alexander Aksenov. Describing the nineties as temporarily narrowing the content of cultural life and thus nullifying the interest of free improvisation in both Tallinn and Riga, Valetina’s bond with the multi-instrumentalist and theatre director Aksenov led to decades of close friendship and several demo recordings such as ‘Reincarnation II’. Their initial chance meeting at a jam session set in motion various cross-country performances and experimental theatre works. With its focus on extended harmony, it is perhaps ‘Reincarnation II’ that most recognisably follows on from Shukai’s first volume.

Across the rest of the disc are collaborative duets with Sergei Letov and Pekka Airaksinan respectively, the three tapes with Letov an example of recordings as a ‘rehearsal process’. These evenings spent in Moscow apartments and St. Petersburg art studios challenged Goncharova’s preconceptions of musical expression; “I was surprised by his (Letov’s) artistic language. He composed here and now music that was so intellectually advanced that it was quite comparable to the compositions of my fellow students. Only, to achieve such a result, it took months for them. So, for the first time, I took part in free jazz collective creativity” (2020).

Atypical violin/saxophone techniques and light, difficult to place percussive textures interplay across the three duets with Letov, the sense of spatiality alluding to the very nature of the recordings. They strike ultimately as private, freeform experiments with sound, never intended for the listener but documenting a practice which explores the dichotomy of improv’s ‘non-professionalism’ and its potential freedom from trained performance. Just one curious corner of Valentina’s musical path, they are included as a deliberate variance to the tapes with Pekka Airaksinen, an already well-regarded composer, early synthesiser fanatic and Finnish radical.

At their time of meeting, Pekka had diverted his attention from punk-indebted noise and free jazz groups to a pursuit of spiritualism via contemporary electronic technologies. Already familiar with the ‘Buddhas of Golden Light’ LP, Valentina found in his work an attraction to the sacred and, after an encounter at a 1988 Helsinki festival dedicated to futurist art and literature, she prepared to visit his studio. After a failed attempt to record a joint album, fragments of the tapes are presented here, highlighting Goncharova’s first real experience of electronic music making in a compositional sense. The result is a marriage of stunning organ tones, processed violin murmurs and progressive minimalism a la Terry Riley or La Monte Young. Fragmented guitar and additional keyboard patterns push and pull through delay units in unison with Valentina’s two violins, at times mimicking the howl of the wind or even the human voice. Once again, the duality of the indistinguishable unfamiliar vs. the harmonic familiar.

Recordings 1987-1991 Vol. 2 completes Shukai’s dive into the sound world of an important yet overlooked artist working within Soviet era electroacoustics.

Shukai (Ukr. Шукай, Eng. Hunt, Look for)
Archive record label focused on bringing back to life the lost tapes from 60–80s — soviet music for films and television.
Sub-label of Muscut

Bandcamp Daily  your guide to the world of Bandcamp